A good authentic beef fajita recipe is worth its weight in gold. So many fajitas don't measure up - store-bought packages, restaurants whose fajitas are below par, and recipes that are easy but flavorless. That's not what you'll find here! This copycat recipe for Lupe Tortilla's Fajitas Grandioso from makes the BEST fajitas you'll ever taste.

What is Lupe Tortilla's Restaurant?

When we lived in Texas, our favorite restaurant BY FAR was Lupe Tortilla's, who had the best fajitas in Houston. It's a fun family-friendly restaurant with good margaritas and great Tex-Mex food and the most amazing Lupe Tortilla Fajitas Grandioso! However, since moving to Florida, the closest Lupe's is about one thousand miles away, so I had to do something about that!

Signs outside tell customers to expect a wait - if you are in a hurry you are encouraged to come back another time. The wait was always worth it, though, and each location has a children's play area with sand and toys...conveniently located next to the outdoor bar. :)

Houston locals know not to bother with a menu. The regular food is good, but if you know the ropes, you order fajitas grandioso for two without bothering to look at the menu. (Heck, I even ordered them once when I dined alone, while traveling back to deal with bad renters in the house we still had there.) Honestly, these are the best fajitas you will ever eat. You can get chicken and/or beef in the restaurant, but beef is my favorite. And they go great with a side dish of charro beans!

So God Bless Texas, and "Scott", who originally posted the fajitas grandioso recipe over at Tastebook (it's gone now). I've made it several times now and I have to say, it's REALLY close, and it's an authentic fajita recipe. In fact, it's the best Tex Mex fajita recipe I've come across.

I think the only reason it's not the same is that my cast iron skillet isn't very seasoned yet. Take note: cooking these fajitas on cast iron is a MUST. Any other cookware simply will not do!

Start with 1.5 lbs of skirt steak. Do NOT use flank steak or anything else that kinda looks the same...looks can be deceiving. You want SKIRT steak!

The first step to make this Lupe Tortilla fajita recipe is the fajita marinade. Scott's recipe calls for marinade for 2 pounds of skirt steak; IMO this is enough for only about 1.5 pounds. You need to have enough marinade for the meat to settled into; otherwise the steak won't be tender enough. It's the citric acid in the lime juice that breaks down the meat, tenderizing it in the process, so you want enough marinade for the steak to sit in. It's not just about the flavor.

I also link to use a meat tenderizer before marinating the steak. This not only makes the meat more tender (obviously!) but it also opens the meat up to better absorb the flavors of the marinade. It's funny because I didn't even know about this type of meat tenderizer before...it's a plastic thing with a bunch of metal "pins" that get poked into the meat to break it up. You can find it on Amazon here (affiliate link).

When you're ready to cook, heat your cast iron pan to a medium-to-high temperature. Let it get hot before you place the meat on it, so that it starts to sear as soon as you add it. This is where a high qualify cast iron pan is really useful, because the more it's seasoned, the better your cooking will be. The one I like can be found here on Amazon (affiliate link). I like the size, and the lack of a long handle for when I want to use it in the oven for other recipes. It's pretty affordable too.

After that, you want to grill the steak on medium-high heat. If the temperatures is too high, the outside of the meat will get tough before the inside is cooked. And if it's too low, there won't be enough searing on the outside to really develop the flavor. The other thing I do differently is to cook the meat for awhile, then slice it against the grain and return it to the skillet to finish cooking. I think the flavor develops better this way.

Doesn't it make your mouth water? Here's a close-up, just in case!

Once you've finished cooking the fajitas, serve them on homemade flour tortillas for a true Lupe's experience. (You can use corn tortillas if you prefer.) Add grilled onions and peppers, as well as sour cream, salsa, cheddar cheese, and steak on a flour tortilla. For a side dish, add a delicious bowl of charro beans, and add a margarita on the rocks for a drink, and it's almost like being in the restaurant.

Here's a photo from another night when I didn't cheat, and made my delicious homemade flour tortillas. They are WAY better than anything you'll ever find in a store. In fact, they're so good that they've ruined me for store-bought tortillas for the rest of my life.

One note: this beef fajita recipe differs a little from my original version of Lupe Tortilla's Fajitas, which excluded the mayo and adobo, and included tequila. Based on reader feedback and especially suggestions from reader Kathryn, I've changed it up a bit. We tried this out and it's delicious. The final recipe with these changes is what is shown below. Thanks for all the help, blog readers!

If you're looking for how to make fajitas like a Mexican restaurant, this one has you covered. 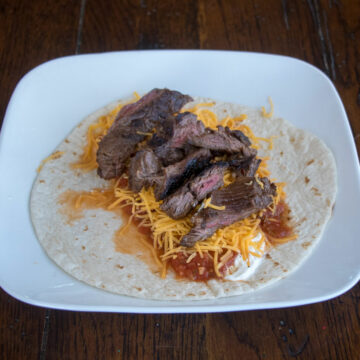