Our family loves Indian food, and we can't resist warm, fluffy naan. I also happen to love beer, and it's quite common to bake bread with beer as one of the ingredients. So I thought it would be fun to try a beer naan recipe, and it turned out great!

Because naan has milk and/or yogurt, I thought a creamy beer might go best. I decided to go with a milk stout, a type of dark beer that uses lactose instead of (or in addition to) other sugars. It's a sweeter beer, since the fermentation process beer goes through doesn't break down lactose.

Specifically, I chose New Holland's Dragon's Milk white, which is a lighter stout with good creaminess and no heavy flavors (like coffee or chocolate) that might detract from or not complement the naan.

I have to say, this turned out great! It's not sweet, so it works fine with garlic butter, but it's not at all bitter either. I didn't try making a sweet naan out of it, but I think it would work.

If you, too, love Indian food, then you absolutely should make this today! It goes great with chicken korma or really almost any dish you can think of.

If you try it, I'd love to hear how it turns out. Drop me a note in the comments below. If you use a different kind of beer, I'm particularly interested in that! Thanks and bon appétit! 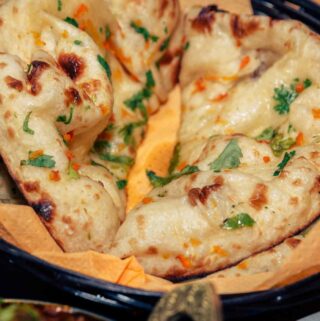 If you wish, you can use herbed butter or add garlic and herbs to your melted better. You can also sprinkle with salt or garlic after cooking. Don't roll the naan dough too thin. Naan should be thick like pitas, not thin like tortillas. Use a small amount of butter. Too much and you fill end up frying the naan. You'll end up with bread that looks more like a pancake if you do this.