I love to cook a pork tenderloin because it's tasty and a change from chicken, but not tough like pork chops sometimes are. This Pork Tenderloin with Savory Sauce recipe is one of my favorite main dishes, because my entire family loves it. The result is moist and tender, but the best part is the sauce. It's is made up of the drippings, marinade, and some broth and butter, and is so good I just want to eat it with a spoon!

Some people confuse pork loin and pork tenderloin. Make sure you are getting a tenderloin for this dish.

I like to serve this dish with fresh vegetables, such as broccoli, asparagus, or green beans. Because the sauce has a little bit of an umami or astringent flavor, milder side dishes suit it well. If you prefer a starch, it would be perfect with white rice or buttered noodles, or simple rolls. I like King's Hawaiian rolls too, since they're a little sweet and they offset this dish well.

Is Pork Tenderloin Healthy or Not?

In my opinion, pork is not unhealthy, and many people can eat it - unless you have religious objections or health concerns specific to pork, of course. Pork is a good source of protein and several vitamins including niacin, B6, B12, iron, and zinc. The pork tenderloin is a lean cut of the meat, so unlike bacon and other pork belly products (which are delicious but less healthy), the tenderloin has its place in many healthier diets.

How to Cook in the Oven

This recipe starts on the stovetop, to help give the final dish a tasty, more robust flavor. Once you've browned it on all sides, you simply transfer it to the oven to finish. Cooking pork tenderloin in the oven is easy since it doesn't take much "babysitting". You just let it stay in the oven until it's done!

When you prepare this dish, make sure you don't overcook the pork. Roasted pork doesn't have to be cooked to as high of a temperature as chicken, and it's safe to eat even if it's a little pink inside. The National Pork Board advises us that 145 degrees Fahrenheit is a safe temperature for pork, even if the interior is slightly pink. Just make sure to test the meat with a thermometer in several locations to make sure it's cooked completely through.

If you have a pan that can cook on the stovetop and go into the oven as well, it makes everything even easier! Once you finish browning, put the entire pan into the oven. Let it cook, then remove the pan from the oven and transfer the meat to a cutting board. Then, finish the sauce in the same pan. Just make sure you don't grab any hot handles (I've totally done that, and more than once, too.)

This has always been one of my favorite healthy pork tenderloin recipes. I originally found it on Chef Mommy, but I made some slight changes. The original calls for parsley, which I loathe, so I leave it out. Most everything else is the same, and I'd like to thank her for the original because it's kept things running smoothly at my house for many years! I don't cook a lot of pork unless it's in the slow cooker, but I find this pork tenderloin recipe to be just perfect for us. 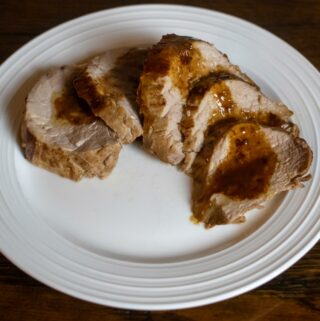