Chocolate Eclair is one of those delicious, easy, no-bake desserts that you often find at pot-luck gatherings and in church cookbooks. I'm sure it was originally created by either Jell-o or Cool Whip whipped cream brands! I also have no idea why they called it "chocolate eclair" when there's a pastry with the same name. But I also don't much care because this chocolate eclair recipe is just that yummy!

It's very similar to a dessert known as "chocolate delight", so don't be surprised if we share different names for the same thing.

I've found a lot of variations of the chocolate eclair cake online. Many seem to use chocolate frosting from a can. While I'm sure those are still delicious, this one creates more of a candy-barn coating with a pretty shine to it. The very rich chocolate flavor is offset by the creamy Cool Whip whipped topping layer. I can't imagine the canned frosting is anywhere near as good. And this is pretty easy too.

I made this for this past Thanksgiving and took it to our get-together. I will say, I don't think it did well in the disposable pan pictured. It developed almost a metallic taste to it. So I recommend sticking to glass or Pyrex or whatever traditional 9x13 pan you happen to have!

The best thing about this dessert recipe is that it has three different types of layers, each with their own texture and flavor. The graham crackers have some crunch and give it a nice base. The pudding and Cool Whip layer is fluffy and moderately sweet, but not overwhelmingly so. Then, the chocolate layer is very rich, but since it's thinner, it doesn't overpower the other flavors.

Plus, chocolate and vanilla always go so well together. Feel free to use either regular vanilla or French vanilla pudding.

Why I Love This Recipe

Our entire family loves this dessert. It's always a favorite with kids, as there's nothing particularly "scary" about it...whereas pecans or pumpkin trigger a negative response in some kids. (Well, in some adults, too.) The ingredients are all easy to find at your local supermarket, too. Just hit the cookie aisle, the baking aisle, the dairy case, and frozen foods and you'll be in and out in no time.

And although you have to plan ahead because of the chill time, it really isn't difficult to make and doesn't require you to be in the kitchen baking for hours on end. It's really had to get this recipe wrong, too. There's no chance of it being undercooked, burnt, or of it falling or not turning out right.

(I hate the supermarket at holiday time, can you tell?!?!)

I don't think I've ever thrown any of this dish away. I do usually hope that enough is left to take back home, though. It keeps pretty well for a few days too, as long as you don't expect the graham crackers to stay crunchy. It's still good even after they get soft.

This chocolate éclair is perfect for a regular weekday dessert or a family gathering at the holidays or otherwise. The only thing it probably wouldn't be well-suited for is a picnic in warm weather. It does need to stay cold! Also, you will need to plan ahead for this dish, since it has to chill overnight.

If you love Cool Whip desserts, make sure to check out my Strawberry Pretzel Salad recipe! 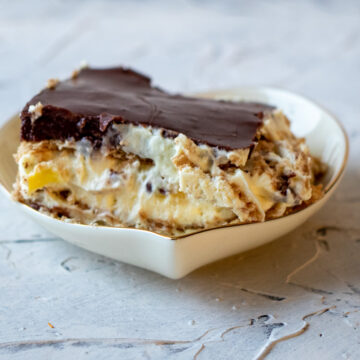 Click here to view the web story of this recipe.