I was never much of a mashed-potato eater growing up. Even to this day, I don’t want my potatoes to taste like potatoes. I usually prefer potato chips, French fries, or some version of potatoes covered in enough cheese that it masks the potato flavor.

But my husband always wants it for holiday meals, so I started tweaking my recipe until I ended up with something that I absolutely love…and that’s saying something!

Contents hide
What Kind of Potatoes to Use?
Milk or Cream?
Seasoning
World’s Best Mashed Potatoes with Cream

What Kind of Potatoes to Use?

Obviously this is personal preference, and if you love russet potatoes, by all means use them. However, I like the richer, more buttery flavor of the Yukon gold potatoes, so I use those exclusively.

You can make mashed potatoes with milk or cream, depending on the consistency you want. I chose the middle ground, and use half-and-half. If you don’t live in America or for some other reason can’t find half-and-half, just mix equal amounts of heavy whipping cream and whole milk.

When I make mashed potatoes – and these are really whipped potatoes but we never call them that – I want them to stand in stiff peaks. To me, runny mashed potatoes ruin a perfectly good holiday gathering. If I put a dollop of mashed potatoes on my plate, when I get to the table, it’s still a dollop. It hasn’t run into the ham or the turkey or the green beans at all.

I want some saltiness to my potatoes, but plain salt is just kind of boring. You could mix up your own spice blend, but I find that Lawry’s Seasoned Salt by McCormick is the perfect seasoning for mashed potatoes. It has salt, paprika, turmeric, onion, and garlic…plus I don’t know what else. The paprika and turmeric also add some nice color when sprinkled on top. I also mix Lawry’s in before whipping so the flavor runs throughout…but not too much, because I also like to sprinkle it on top because it looks pretty. Family members can always add more if they want. But you can never take out the salt if you use too much!

Obviously mashed potatoes go with almost any meal, so try this on weeknights and regular dinners, no need to save it for the holidays. It goes especially well with my tangy and sweet baked maple Dijon chicken thighs! I hope you enjoy it! 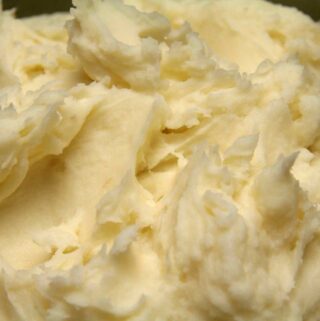 My kids literally come home from college for these mashed potatoes. I made a different potato recipe one holiday and they all revolted! If you want the most delicious mashed potatoes on the planet, read on.
5 from 1 vote
Print Recipe Pin Recipe
Prep Time 20 mins
Cook Time 30 mins
Total Time 50 mins
Course Side Dish
Cuisine American
Servings 12 people
Calories 175 kcal

Copyright 2022 - House Full of Monkeys - All Rights Reserved
Out With The Old,
In With The New Year