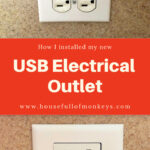 WARNING: Use all precautions when working with electricity in your home. Make sure you know what you're doing. If you aren't comfortable, hire a handyman.

As a family of five, all with cell phones, we found ourselves constantly arguing over "cubes" - the things that allowed us to plug our lightning cables into the power outlet. We'd lose them, find them, find out someone else had "borrowed" them, or whatever...it seems like even if we owned more cubes than there were people, we could never find one.

So I decided I wanted a USB outlet in the kitchen. Then we could all plug our phones into the outlet (even two at a time), set the phone out of the way on the "tall counter" (which isn't used for food prep and cooking), and stop fighting.

The original outlet was a normal one with two electrical plugs. It's not the GFCI breaker and there's nothing unusual about it...except that it's sideways and mounted against the solid surface counter backsplash.

Fortunately it's in the perfect location, between the family room and the kitchen and generally not in the way. So I did a little internet research and decided this was a project I could likely tackle.

So Pete and I went off to Lowes and found the replacement outlet we wanted.

When we got home, I plugged in a lamp and then went to the garage to figure out which circuit breaker controlled the outlet. I didn't want to get electrocuted, you know! The lamp made it easier for me to see when I'd gotten the right one, because the light went away.

After removing the facet plate, the outlet just pulls straight out. There were extra-long screws, required by the added depth of the backsplash (1/2" or so) before the outlet box.

Some outlet boxes, like this one, have three wires - a hot wire, a neutral wire, and a ground. These are called "end-of-run". You see, power outlets are often wired one after another in a line, or "run". An end-of-run outlet is the last one. Other outlets have six wires, because the run it's on continues down to another outlet.

But in this case, we only had three. It makes the job a little easier.

The black wire is the hot wire, which is how power comes from the breaker panel. The white wire is the neutral wire - any unused electricity goes back to the panel along this wire. The bare copper wire is the ground.

These wires are thick and hard to bend, so I had to use needle nose pliers to get them attached to the screws on the new outlet. But once we did, the outlet went right back into place. We reused the extra-long screws from the old outlet because of the backsplash. Then we put the plate on.

The image above shows the finished outlet! Isn't it awesome?

Now we have a beautiful new USB + power outlet in the kitchen for all 5 of us to enjoy!