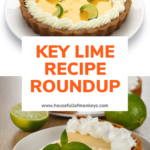 It's October and officially it's fall, but here in Florida it still FEELS like summer. I've decorated my house for fall and Halloween, but I find that I'm still craving key lime pie.

In my mind, I feel like everyone has heard of key lime pie. But if you're not familiar with it, it's a Florida dessert made with key limes. These are small, more tart limes named after the Florida Keys, the islands off the southern tip of our state. And their best known use is in Key Lime Pie.

Given my cravings, I thought it was highly time that I did a roundup of my favorite key lime recipes!

The most obvious dessert that uses key limes is the key lime pie, a creamy sweet+tart combination that is perfect in hot weather. It generally has a graham cracker crust and whipped cream on top.

You'll find key lime pie in many restaurants in Florida. Some are simple and some are fancy, but they're generally the same: graham cracker crust, creamy key lime filling, and dollops of whipped cream.

I have to admit that this is one recipe I don't generally make completely from scratch. It's just too easy to buy a pre-made pie crust! The recipe I use is from Once Upon a Chef. Her key lime pie recipe is easy and delicious, a perfect if dangerous combination!

Key lime pound cake combines two of my favorite desserts: pound cake and key lime pie, of course! This is a dense but moist pound cake with delicious flavors.

Barbara Bakes' key lime pound cake is another recipe that is super simple to make. Like most pound cakes, you just mix up the ingredients and bake. This does have the addition of a key lime glaze, which adds another step, but it's the perfect way to top it. That way you have key lime flavor in the cake itself, plus an extra "hit" of lime taste in the glaze.

If cookies are more your thing, Your Homebased Mom has a great recipe for Key Lime Bars. These are bar cookies that you make in a 9x13 pan and then cut into squares. Although the cookies have three layers, they're still not difficult to make, just maybe a little more time consuming.

The bottom layer is the densest and makes the "cookie" part of these bar cookies. The pecans in it really compliment the lime flavor that is part of the second layer, which is the part that is most like a key lime pie. Then after baking they are topped with a third layer. which is a thin glaze that has more key lime flavor.

If you like Rice Krispie treats, then this dessert is right up your cereal-loving alley: Key Lime Rice Krispie Treats! But don't be fooled into thinking that these are just normal ones with lime flavor added. Nope, Heather at Kitchen Concoctions went all out with this one!

In addition to the lime flavor, the treats also have white chocolate and graham crackers to really give it a unique flavor. And of course, there are Rice Crispies, butter, and marshmallows to make it more like the traditional snack. But this is way more than traditional...the flavors really combine into something special.

I'm not sure I've ever come across a Delish recipe I didn't adore. Their Key Lime Crack just another entry in a long line of delicious recipes from their site. It's really clever - instead of graham crackers, it uses Golden Grahams cereal. Smart.

In addition to the Golden Grahams, it also has pretzels for a bit of saltiness, and mini-marshmallows for sweetness. It's all held together with melted white chocolate. The key lime flavor comes in at the end, with a sprinkle of key lime zest and a bit of spritzing of the juice from the limes. A perfect snack for a summer movie, I say!

Similar to the recipe above, this is another grab-a-handful snack food. Key Lime Muddy Buddies are delicious even though they don't really have any key limes in them. Instead, the lime taste comes from flavored gelatin. But you don't have to tell people this!

This is a great, quick and easy recipe from Totally the Bomb!

These Key Lime Cupcakes from Life Love Liz are an easy way to share a delicious key lime dessert in your child's class, at a church gathering, a family picnic, or more. I love cupcakes because they're hand-held, don't require serving utensils, and because they have frosting!

If you do take it on a picnic, you'll want to keep it fresh, so check out these ideas for keeping food cool when picnicking.

Both parts of this recipe - the cake and the frosting - have real key lime flavor added in the form of juice and lime zest. You can of course leave out the green food coloring, but I like the look it gives to the frosting. It's also perfect for St. Patty's Day with the green frosting too!

The best part is that these are made with a box cake base, so no measuring and sifting. And they're still yummy!!!

I love cheesecake so much that I have an entire Pinterest board dedicated to it. Or I did; I eventually moved it to a section under recipes, but even now it's separated out from all other desserts. Cheesecake is how we know God loves us and wants us to be happy! (Yes I know it's supposed to be beer, and I love beer too, but let's focus for a minute. Cheesecake. CHEESECAKE. Yum....)

Cheesecakes in general aren't that easy to make. They take a lot of time and usually have a larger number of steps than many recipes. This key lime cheesecake recipe from Will Cook for Smiles is no exception; in fact, the extra top layer means even more steps. But it's totally worth it.

On the bottom is the crust, and then there's a key lime pie layer Then it's topped with a meringue layer with perfectly browned peaks. My friends it does not get any better than this!

This Key Lime Pie Martini recipe is from Amanda's Cookin' but let me just say that Amanda is also mixin' up some amazing cocktails!

If you want a superb key lime adult beverage, head on over. It's a mix of coconut rum and vanilla vodka with a bit of pineapple juice as well as key lime juice thrown in. Heavy cream gives it more of that key lime pie consistency, and the graham-cracker rimmed glass mimics the taste normally found in the pie crust.

This is perfection in a glass!

Those of you not still in the throes of the Florida heat may not be in the mood for cold popsicles right now. But let me tell you, after I come back in from walking the dogs or birding, all I can think of is having something cold to eat or drink! That's where these amazing Key Lime Popsicles come in!

This recipe from Nourish and Fete makes beautiful popsicles that taste as good as they look. And although they aren't low calorie, they are pretty healthy due to having Greek yogurt and natural honey as a base. Be sure to give these a shot the next time you're in the mood for a cold treat.

There's something about the combination of key limes and coconuts that makes for an amazing taste! When we visit the Florida Keys, we always stop at Harriette's on Key Largo for some of their amazing muffins. My favorite Key Lime Coconut. And these Key Lime Coconut Donuts from Baker by Nature have a very similar taste!

You may think donuts sound tough to make. But these beauties are baked in the oven - no fryer or oil needed - and they only take 15 minutes. Even toasting the coconut flakes is really simple. And like some of the other recipes here, you'll find key lime throughout this snack. There's zest in the donut itself, and both zest and juice in the amazing glaze on top.

Eat it for breakfast, or eat it for dessert....or anytime you want!

I hope you've enjoyed these key lime recipes, and that I've inspired you to check out some of these amazing bloggers' creations and give them a shot. If you do, consider sharing on social media and tagging #housefullofmonkeys so I can take a look! I can't wait to see what comes out of your kitchen!