You are here: Home / Food / How I Plan and Prep a Week’s Worth of Dinners
67shares 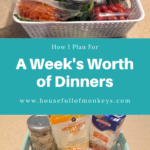 I have started a new practice – shopping for and prepping a week’s worth of dinners at one time.

Recently my doctor threatened me with a choice: get my triglycerides numbers down, or go on cholesterol medication. She gave me two months to fix my diet and see if it helps.

Nothing else in my past has ever motivated me to eat healthy like that choice has!

The hardest part of eating healthy, for me, isn’t an issue of willpower. It’s not having something ready for dinner. Then we fall back on delivery (pizza), takeout (Chinese), or going out. Occasionally I can still eat healthy in those circumstances, but it’s rare.

I started looking for healthy meals. I perused Cooking Light and similar. But I realized that I really could use most of my existing recipes. I just needed to stick with them and plan ahead.

The other thing I wanted to do was save money on the cost of food. Obviously it’s more expensive to eat out than cook at home…unless you’re comparing Krystal burgers with homemade lobster, that is. Seriously, though, I can even cook shrimp twice a week and still be way under what it would cost to eat dinner out 2-3 times a week.

So my goal became planning for a week’s worth of meals on the weekend, and doing enough prep that dinner takes no more than 20 minutes each weeknight. It might be in the oven longer…but I won’t be in the kitchen longer.

The first step is reaching this goal is to plan out a week’s worth of meals. For me, this means six nights. We can always eat leftovers one night, or have one night out (by choice, not because there’s nothing but cereal in the house!)

Because of my need to eat healthy, I’m trying to load my meals with chicken, fish, and shellfish. I still eat red meat, cream, and cheese, but in smaller amounts.

An example menu is this. (Bonus – I linked to the recipes for you!)

Sunday – grilled chicken with the sauce from this recipe, plus broccoli florets sauteed in olive oil

The beauty of this plan is that on Sunday morning, I can cook all the chicken for the week, cook the rice, and chop and store all the produce. More on that in the next step :)

Sunday is definitely the major work day, but it’s much better than trying to do it all on a weekday. Shopping, cooking, and prepping usually take me half the day. Then I can play, craft, or nap, assuming there aren’t any kids’ sporting events to attend.

The first thing I do is start 2-4 cups of uncooked rice (depending on my meal plan needs) in the rice cooker. I don’t go for a lot of small appliances in the kitchen, but I love my rice cooker. It leaves the stove and oven free for everything else.

I then store the rice for use later in the week. Curious about how to store and reheat rice so it still tastes good? Check this post from Southern Living.

For the meals above, I cooked 12 chicken breasts. That’s a little more than needed, but it gives me some extra to put over salads for lunch, if I want. I do these in batches of 4 breasts at a time. It takes around 20 minutes per batch.

How do I cook it? Click right on over here to find out how to make chicken breasts actually taste delicious. It’s actually really good and I’m so glad I found that post.

While the chicken cooked, I chopped all the vegetables and peeled the garlic for Sunday’s sauce. I would like to store them all in mason jars (less waste, fewer chemicals than plastic), but I didn’t have quite enough, so I also used zip-loc bags. The cherry tomatoes and shredded carrots just went into the container along with the rest of the chopped vegetables.

Keeping them all together in one container makes it easier to find.

The goal is to make each weeknight fast and easy, so here’s how that plays out.

Sunday – I have a little more time since it isn’t a weeknight, but this was still easy. I made the sauce from the recipe above. The hardest part of this normally would be peeling the garlic, but that was done. Once the sauce was ready, I microwaved the pre-cooked chicken breasts then added them to the sauce for about 3-4 minutes. I also sauteed the broccoli in a separate pan, which was easy because it was already chopped. This took maybe 20 minutes total.

Monday – I cooked the sauce for the casserole. I had to run to a meeting, so I asked my teenager to add it to the casserole, top it with cheese, and cook it for 25 minutes. My time was about 10 minutes, and I’m sure his wasn’t more than another 10 minutes.

Tuesday – This one I pretty much cook at once, but it’s so easy. Angel hair pasta cooks in 4 minutes, and everything else just gets thrown in the pot. I buy uncooked shrimp that has been peeled and de-veined, so I don’t have to do any of that. The garlic bread comes frozen from the supermarket and just reheats in the oven.

Wednesday – This one I also cook mainly during the evening, because it’s easy. Throw together the sauce, throw the fish in the oven, and you’re done. And roast the asparagus in the oven at the same time. Since I already washed it and snapped the asparagus on Sunday morning, there’s nothing to it.

Wednesday night I also put the second bag of shrimp in the fridge to thaw.

Thursday – honestly this one probably takes the most time. I could actually roll the enchiladas Sunday morning, but I don’t have enough room in the fridge to store two casserole dishes. (Maybe I need something that will let me stack them without smushing the food!) But the chicken is already cooked, so I just mix it with the cheese, roll it into the enchiladas, and put them in the dish while the sauce simmers. The rice is also easy; I just have to remember to start it early enough. I’ll post my easy recipe for the rice soon and link it in.

Friday – you can’t get any easier than this. Saute the shrimp in a bit of oil, then pour the jar of curry sauce over it and let it simmer a bit. (Not too long, so the sauce stays thicker.) Then serve it over rice that I cooked earlier in the week.

Saturday – leftovers or eating out. This week we’ll probably go out to dinner for my middle child’s birthday. Which most likely means Mexican!

How to Plan Ahead for a Week’s Worth of Dinners

Of course, we don’t eat the same meals every week. This plan was just an example. Here are some tips on planning out your meals.

Have you tried this approach to meal planning and cooking? If so I’d love to hear your experiences! Please leave a comment below.